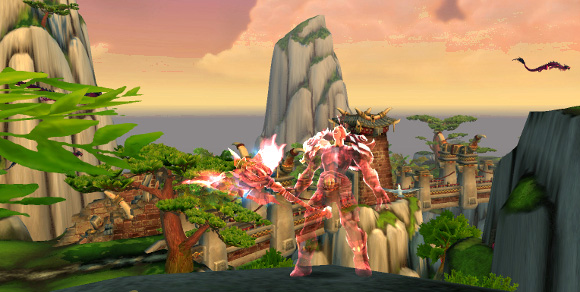 There is a certain NPC on the Timeless Isle that will sell you an item that enables the collection of Bloody Coins through various acts of PvP.  Previously you could only get these coins on the Timeless Isle, by winning a PvP battle.  This has now changed, so you can collect your coins in battlegrounds whenever you get a killing blow ... and it's a 100% drop rate from killing blows.

The Bloody Coins can be used to buy both a battle pet and a mount, amongst other things, from that same NPC.

See the two articles relating to this, here:

That will speed things up a little :)

After some research I have found that it works exactly the same as on Timeless Isle, you just need the killing blow in a pvp fight, the only difference is there's a new item you need to use that works off the island

The only real difference i think it will make is that you get more, since you don't really have to search for people.

Ah right .. so I need to buy a new item first .. does it have the cooldown you feared when you first died in a BG?  Or does it persist?

From personal experience I can assure you that it does not persist. If you die, you'll need to wait till the 10-minute cooldown has ended before you can try again.

Light travels faster than sound. This is why some people appear bright until you hear them speak.
Poisonenvy

And I've just realised it's not the Censer that you need, but Fire Watcher's Oath, which you can get from the same guy.

The item has no cooldown but like Mae said it does not persist through death, on the bright side it can be used anywhere not just BGs, but not killed anyone yet so not sure if it has a diminishing effect meaning each person can only be tapped once each the the TI one

It does have a cooldown - of 10 minutes.  That is also how long the effect lasts, so as long as you don't die, you will be able to keep reapplying .. however, if you are anything like me you die fairly regularly in BG's so it is probably best to time it well.

It also doesn't seem to work for healers (ie, I was getting second hand kills, but not the coins), unless you do some damage too and get lucky, as you have to be the one to deliver the killing blow.

I also discovered that, while you could mount and shift form as a druid to cat/bear, etc .. the effect gets knocked off if you go into flight form - I don't know if this is intended or a bug - just unfortunate that I'd applied it before joining the BG queue, with the hope that, by the time I got in and died the first time, the CD might be about up - but then I went into flight form to hand a quest in and the buff disappeared :p