Back to Reputation home page 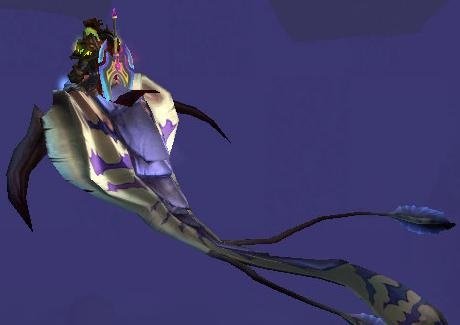 The "Sha'tari Skyguard" are an air wing of the Sha'tar of Shattrath City, defending the capital from attackers in the hills as well as battling against the arakkoa of Terokk in the peaks of Skettis. The Skyguard has two outposts, one in the northern reaches of the Skethyl Mountains and one near Ogri'la. Players start out at neutral standing with the Skyguard.

Attaining exalted status with the Skyguard will enable you to buy several Nether Ray mounts, a faction tabard and a non-combat pet.

A full list of all the quests and dailies can be found on the WoWWiki.

Although the dailies do give a lot of reputation, it is now easily possible to continuously grind Skyguard reputation through the Elixir of Shadows.

The quest World of Shadows gets you started, it only needs the collection of 6 shadow dust from various arakkoa around the Skettis mountains. You then get one Elixir of Shadows which, when imbibed, allows you to see shadowy arakkoa and kill them. While under the influence you should also do Secrets of the Talonpriests. Talonpriest Ishaal drops Ishaal's Almanac which starts the quest chain needed later.

One way is to start up on one of the buildings, chuff the pot, then go round killing normal and Time-Lost skettis alike. Each kill awards 10 Skyguard reputation.

While you see shadowy things, there is a chance to get Time-Lost Scrolls from the Time-Lost Skettis. They also drop shadow dust. I was able to collect around 40 pages for every 20 minute buff the Elixir of Shadows gave. So? 10 of these can be used to summon each mini-boss in the Skettis area, each boss gives 100 rep per kill. There is also a one time quest Adversarial Blood for killing all 4 which awards 350 rep, and a repeatable follow up Tokens of the Descendants for 350 rep. These quests require following the quest chain started with Ishaal's Almanac.

The mini bosses are summoned from the summoning circles in Skettis, and they are all soloable (depending on your level, of course!). They are Karrog, Darkscreecher Akkarai, Gezzarak the Huntress and Vakkiz the Windrager.

Should you kill all 4 mini bosses, you will be given a Time-Lost Offering to treasure for all time, or use to summon Terokk the big bad of the Terokkar area, for Terokk's Downfall.  Kill Terokk and you get 500 reputation plus 1000 for handing in the quest.

Alternatively use the approach as posted all around the internet - get 6 shadow dust by killing arrakoa, get an Elixir of Shadow, go berserk killing everything in sight while the buff lasts and collect 40 Time-Lost Scrolls, summon and kill the 4 mini bosses, hand in their bits for a Time-Lost Offering, then rinse and repeat. Ignore Terokk unless you find it easy to solo.