I've just been tinkering a bit with the website - the most visible being that now everyone, not just those who aren't logged in, can see the "carousel" widget that has links to our application, our Armories page, our Guild Rules and our new Guild Raiding wiki page.

The latter has come about because we're trying to explain to people, as best we can, the type of raiding we do here - hopefully this page makes it much more clear.

If anyone has any feedback on that page - typos, clarifications, suggestions - please let me know.

There is a concern that, although not currently a problem due to the point in time we are in the expansion, once things get busy again, there will be excessive competition for raiding spots in our Wednesday raid nights.  Primarily because Wednesday is a favourite for a lot of members/potential members, and sometimes people have lives outside of WoW on a Friday.  While I'm not concerned about that competition for regular guild members, I am a little concerned that we might have a situation at some point where people are vying for a spot, who do not, the rest of the week, generally contribute to the guild in some way (ie, they don't log in).  This should not be a problem with who we have in the guild at the moment, hopefully, however, a lot of people applying, or considering applying to the guild, are also "Wednesday-only" raiders or, worse, have "main" characters elsewhere.  Which feels potentially a little unfair to our long-standing members, if newer people join, log in only for one night, then disappear until the next week.

So I'm currently considering changing our guild adverts a little to try and combat that.  I may well also try to filter out those applicants as and when they come through.

I'd like to ask that, if anyone has a friend or acquaintance that they think might be a good fit for Dark Wolves, they also bear that in mind.  I'm not looking to max out the number of guild members - I'm after quality, not quantity.  So, without trying to put people off, I'd suggest that before recommending us to anyone, you try to establish if they would be an asset to the guild.  If they're a raider, would they be able to raid on a Friday.  Irrespective of whether or not they're a raider - are they looking for a "home" for their main characters, or just a shed to keep a few characters out of the cold - visited only occasionally?

Happy to answer any questions

Another new Boss down!

It was a dramatic night tonight - we continued on from last week to have a go at the last two bosses.  I think we probably spent more time talking about tactics on Carapace of N'zoth, than it took to kill him - one nearly got him, the second we got him down pretty easily.

The last boss, N'zoth, was not quite as forgiving and simply handed us our butts back in a bucket.  Apparently we're good at going insane - who knew?!  We also managed to bug it - but I reckon we're in good company there!  Hopefully we will have an other go at him soon.

In the meantime .. we didn't get a close screenshot next to the boss we killed, as the other one turned up .. so we took one from a distance 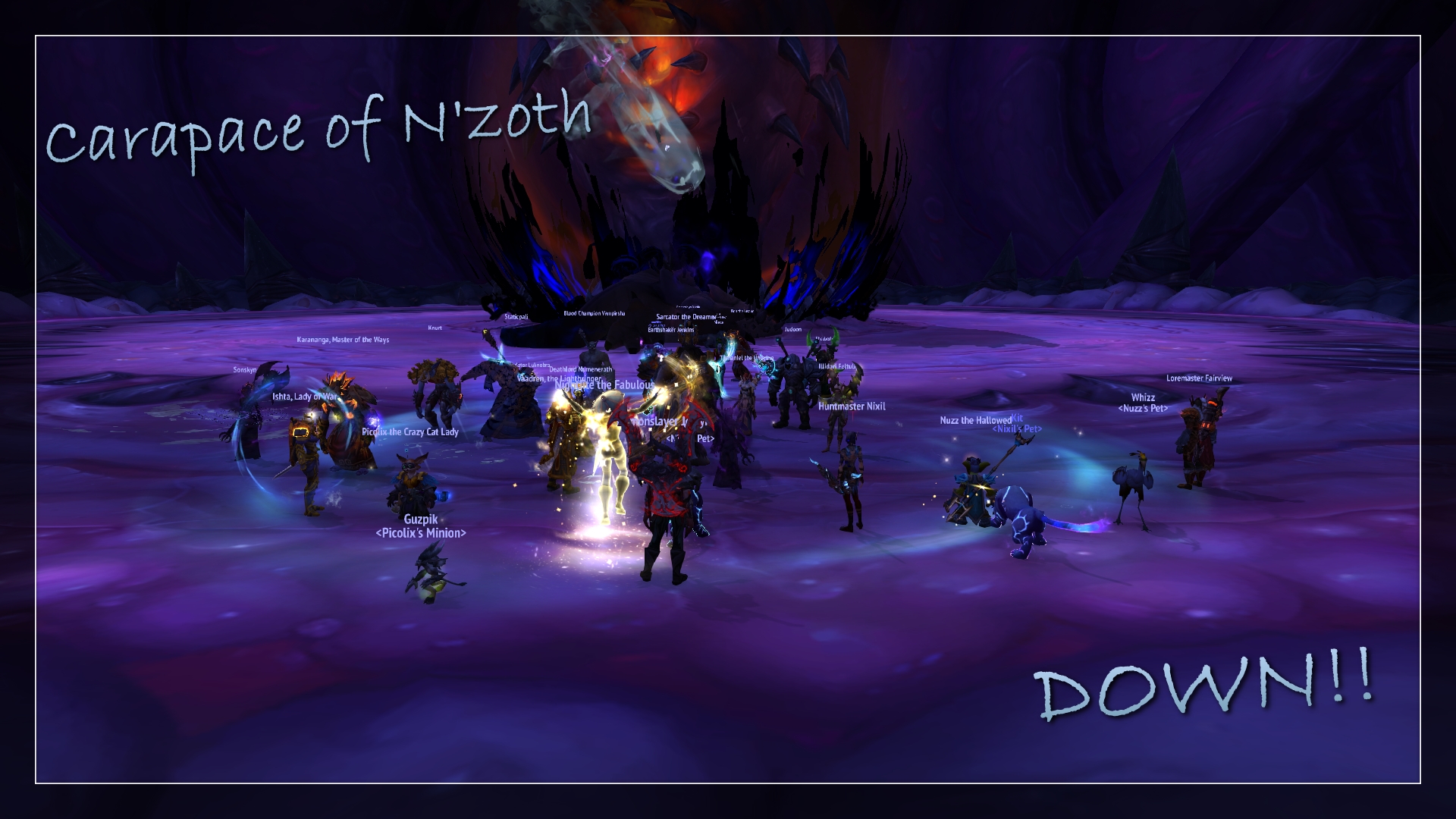 For those who missed the cutscene prior to Carapace:

Amazing night tonight - congratulations to everyone!  We welcomed back a few "old" raiders (I know, I know .. less of the "old"!), started working on the more technical bosses where tactics started getting a bit scary, but we still managed to get two new bosses down - now 10/12! 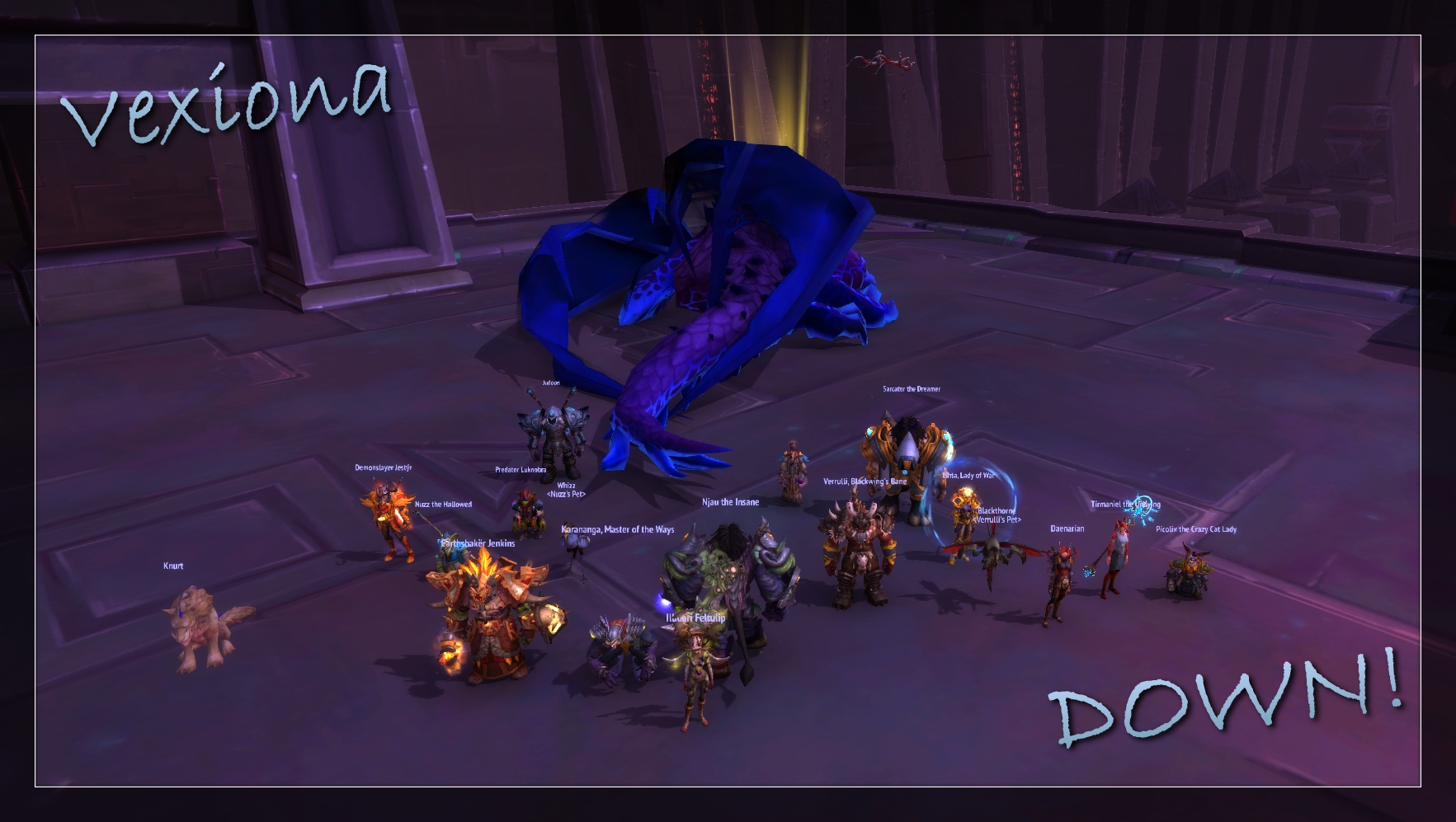 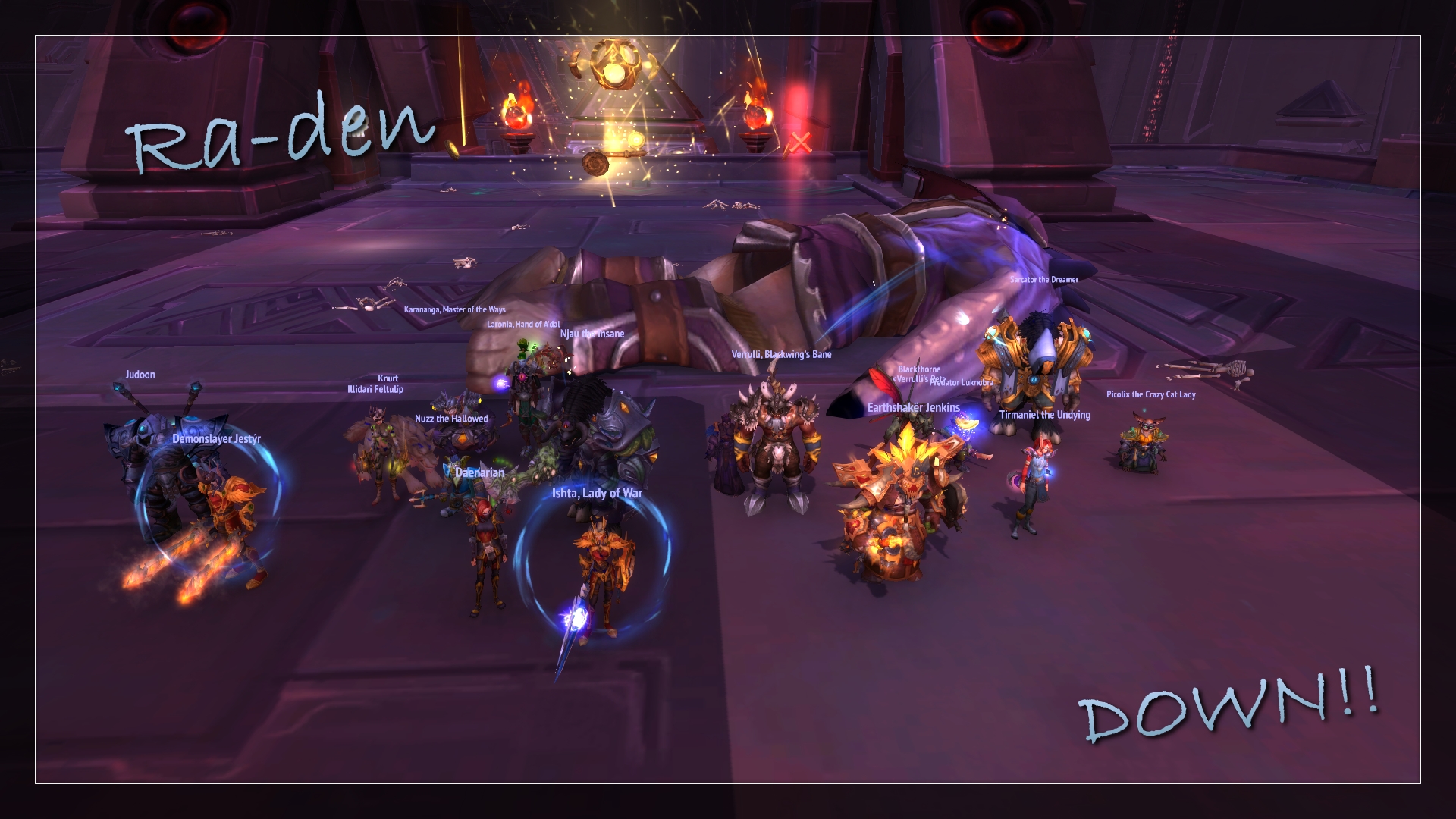 If you are a regular raider (ie, you raid as and when you can, at least once or twice a month, and are an active guild member) and you're in the Wolf or Wolf Alt rank (prior to today), then please let me know and I'll check to see if you can be moved to the Werewolf rank.  Remember .. Werewolf is on a "per character" basis and resets every expansion.

).  If you do not have a character at the Wolf/Wolf Alt/Werewolf rank, then any alts invited into the guild should join as a Pup.

The following roster removals have also been made:

Good fun tonight - and we got two new bosses down!  Woohoo! 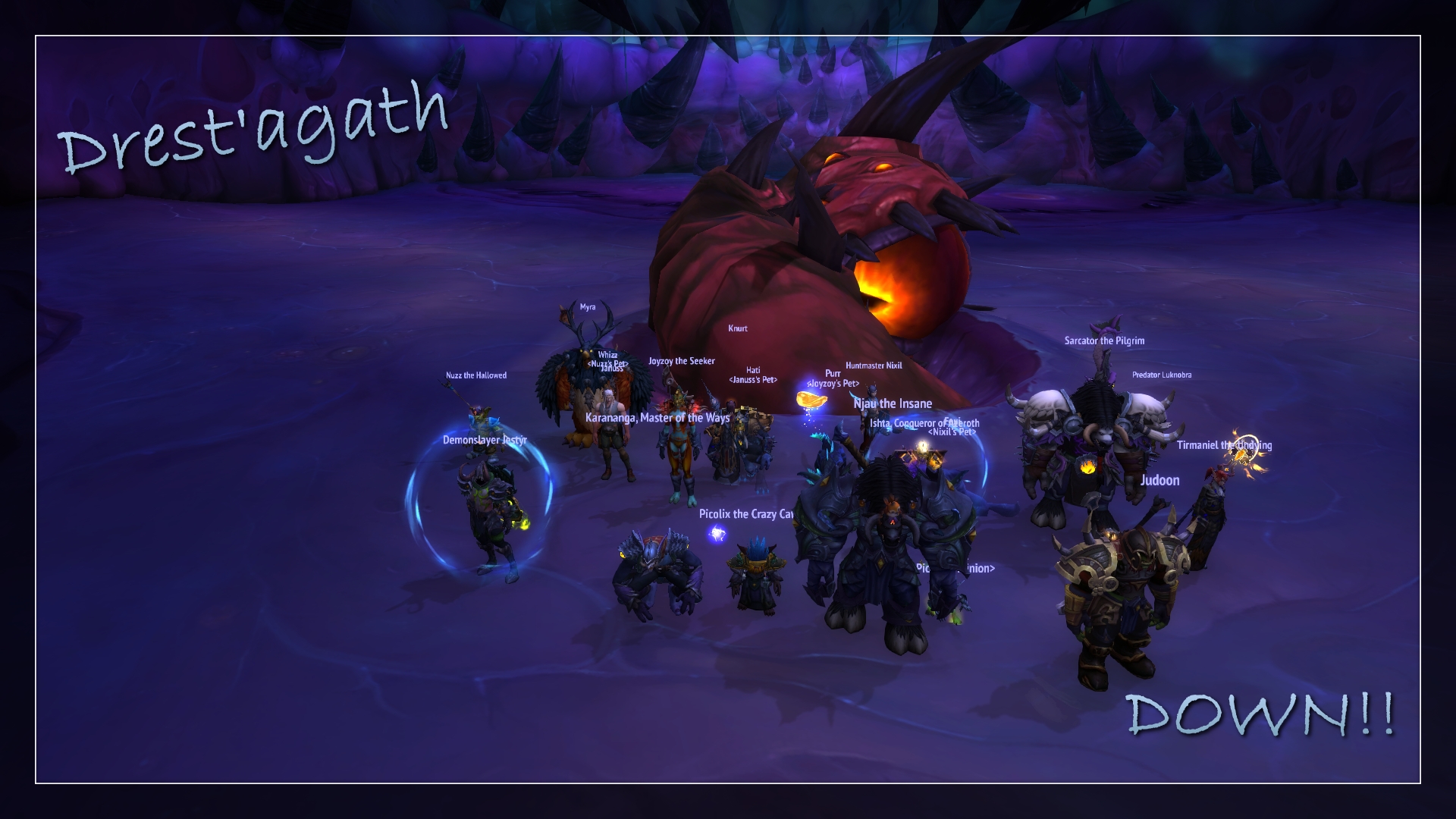 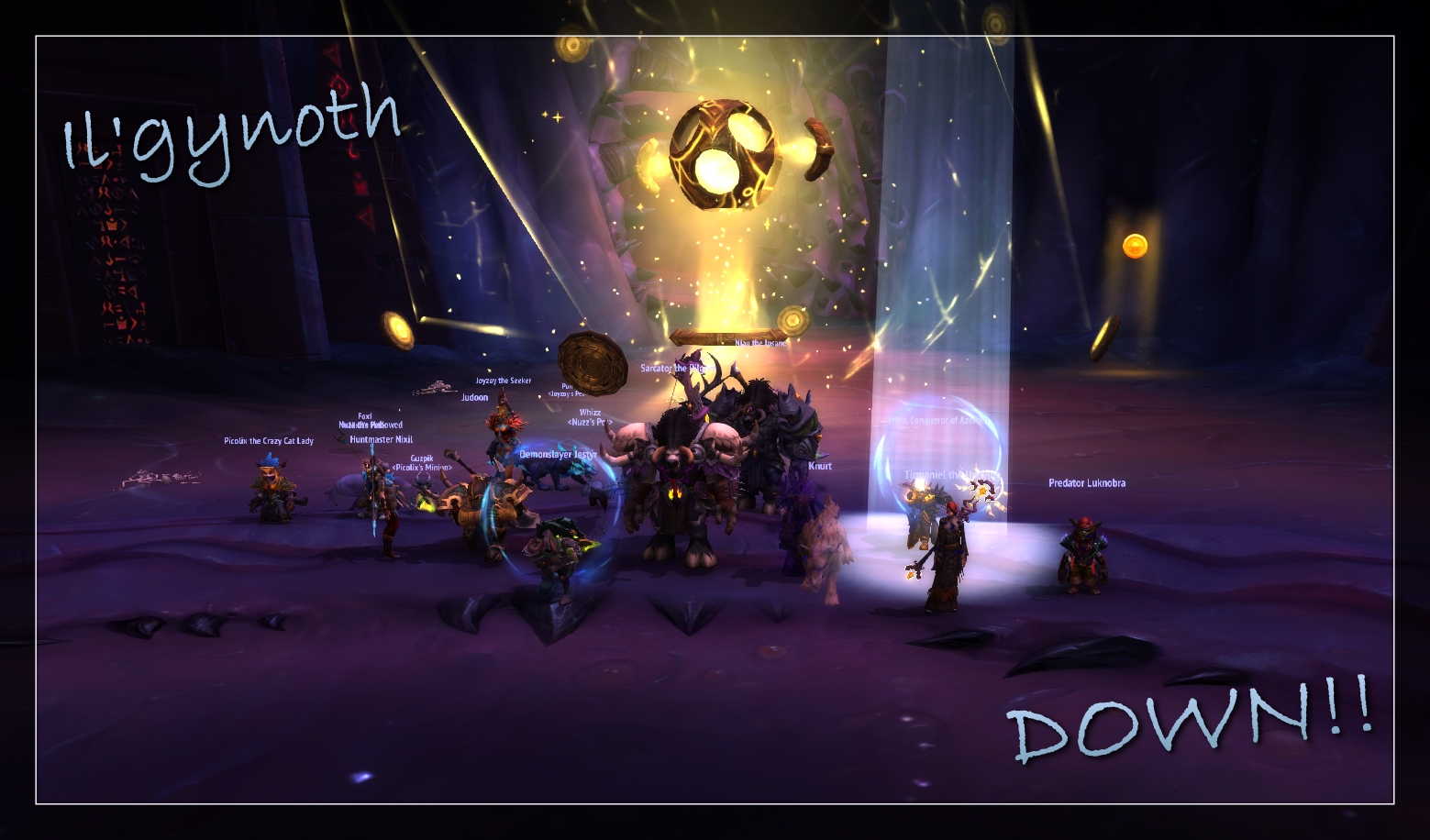 Congratulations to everyone involved ... another three bit the dust!  Great fun: 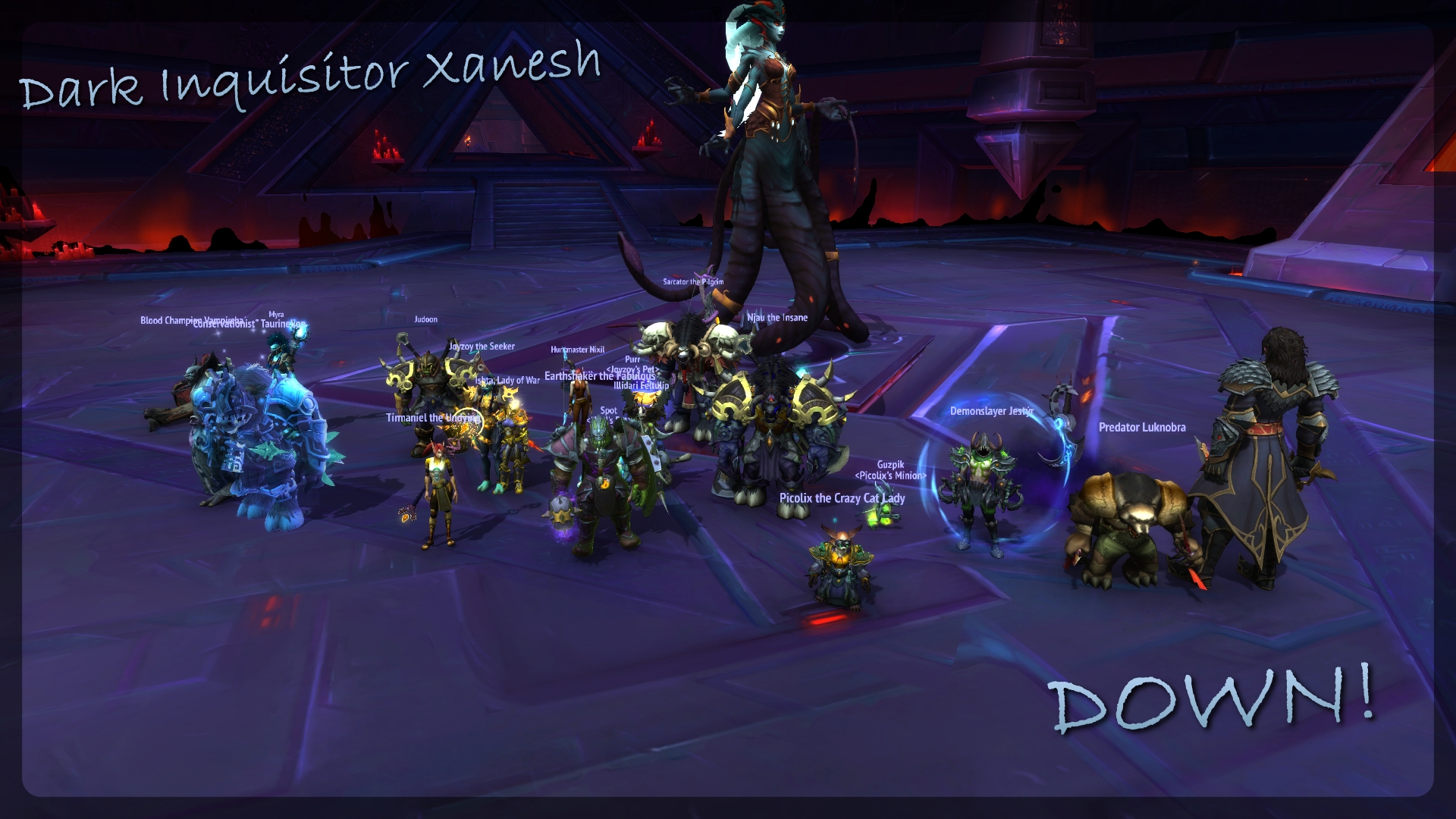 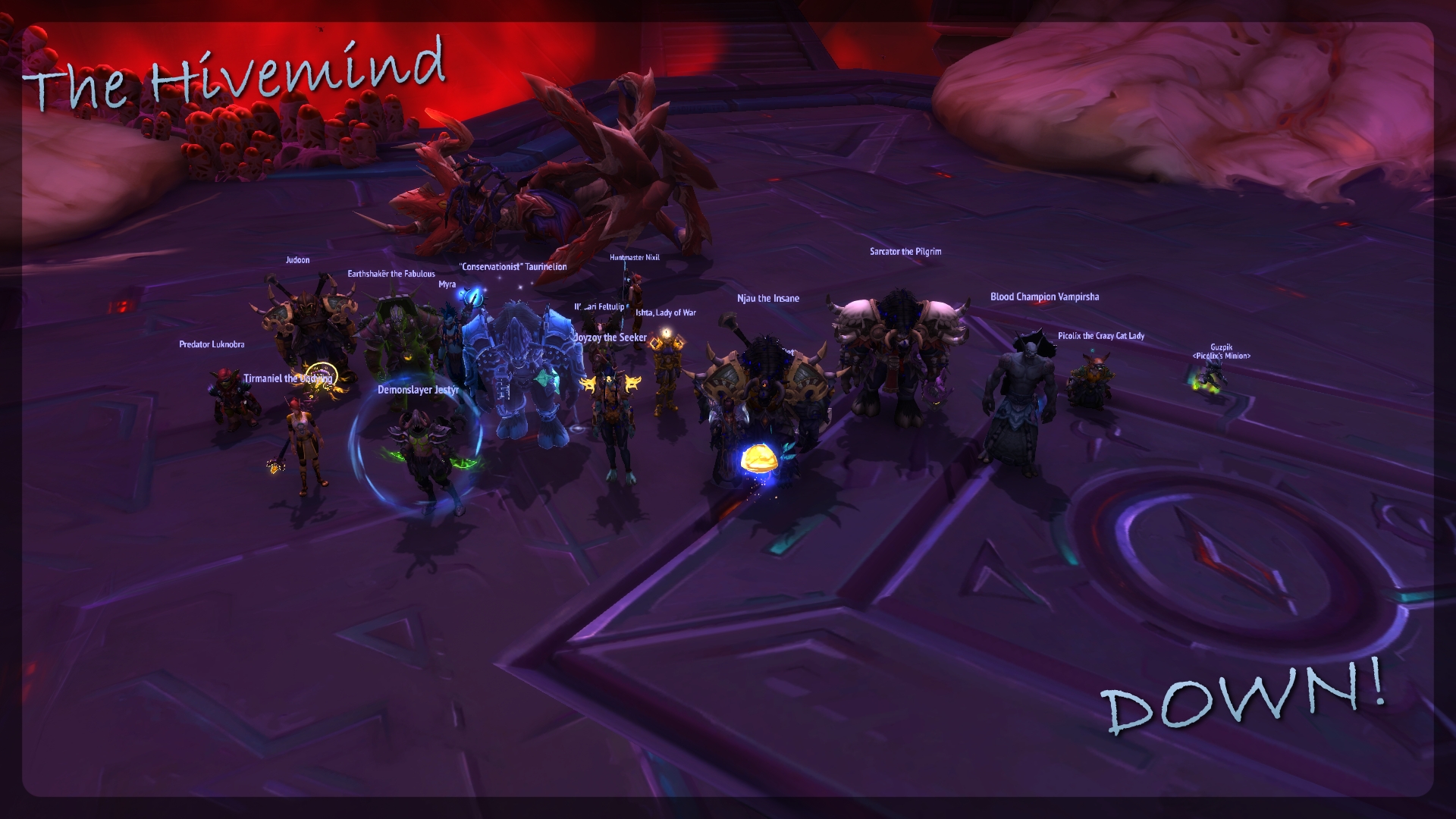 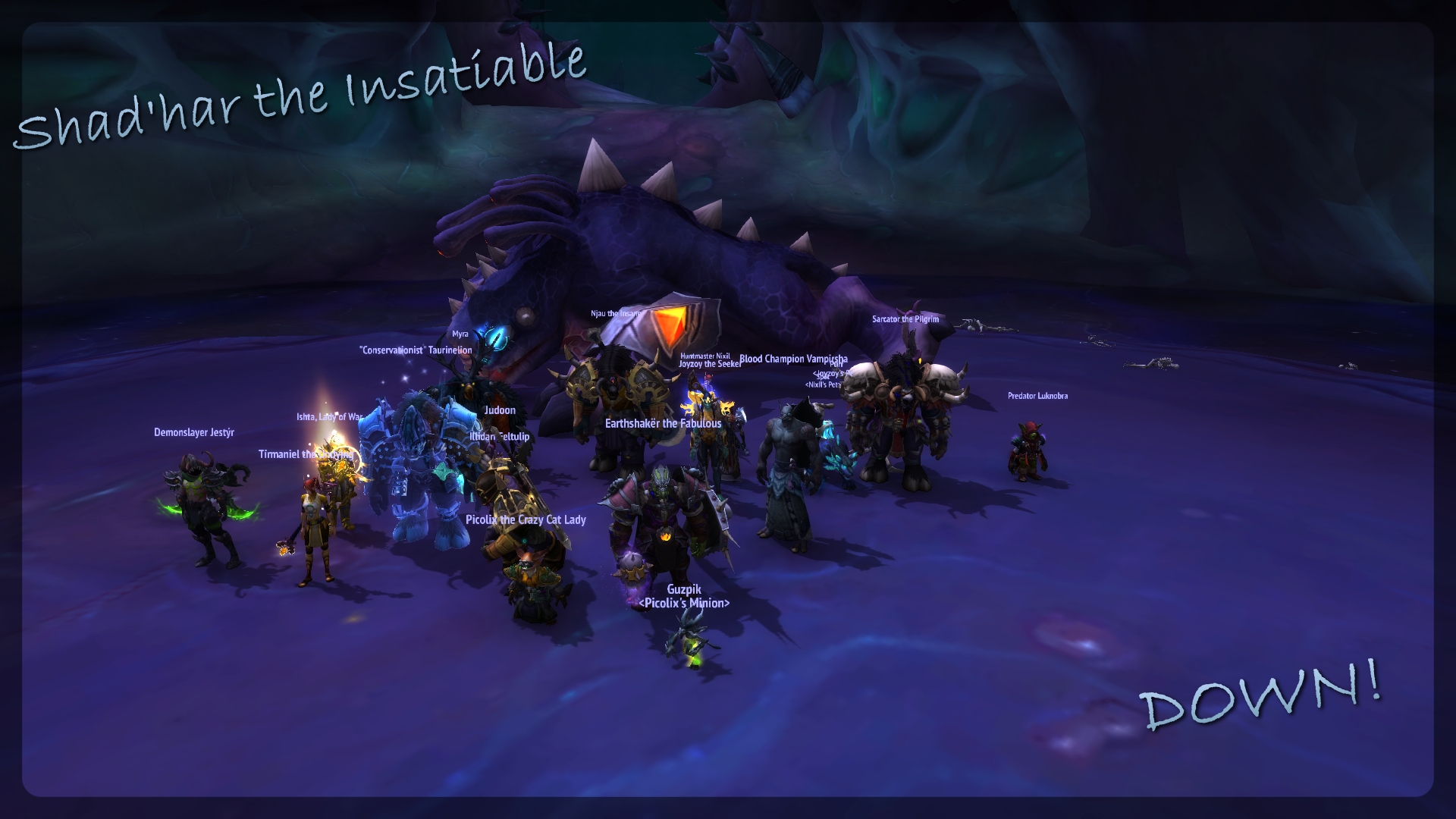 Congratulations to everyone involved .. fun night, fun raid .. three new bosses down (and one that very nearly went down - we wiped at 0%!)

I forgot to get a screenshot of the first boss - sorry! 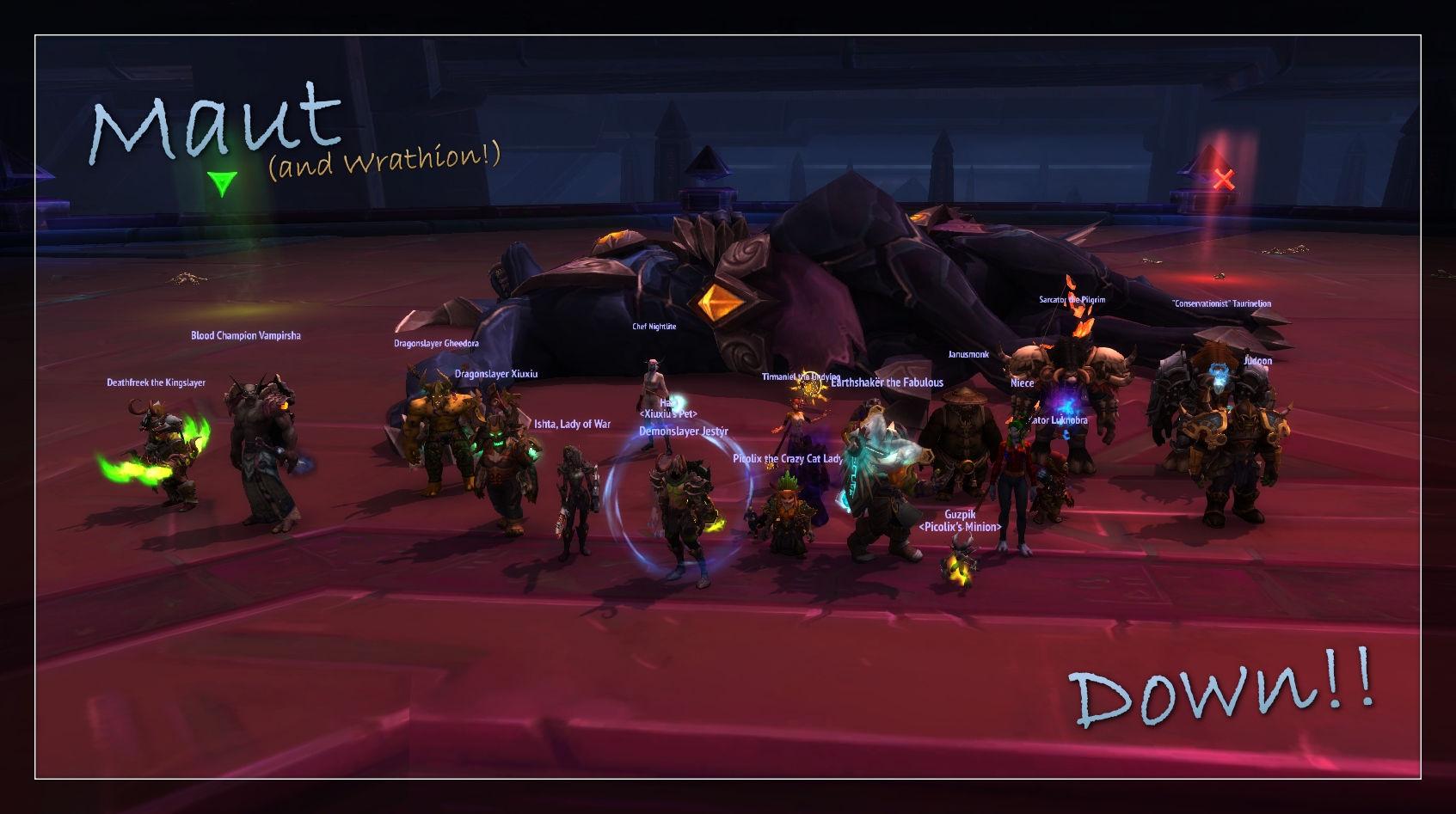 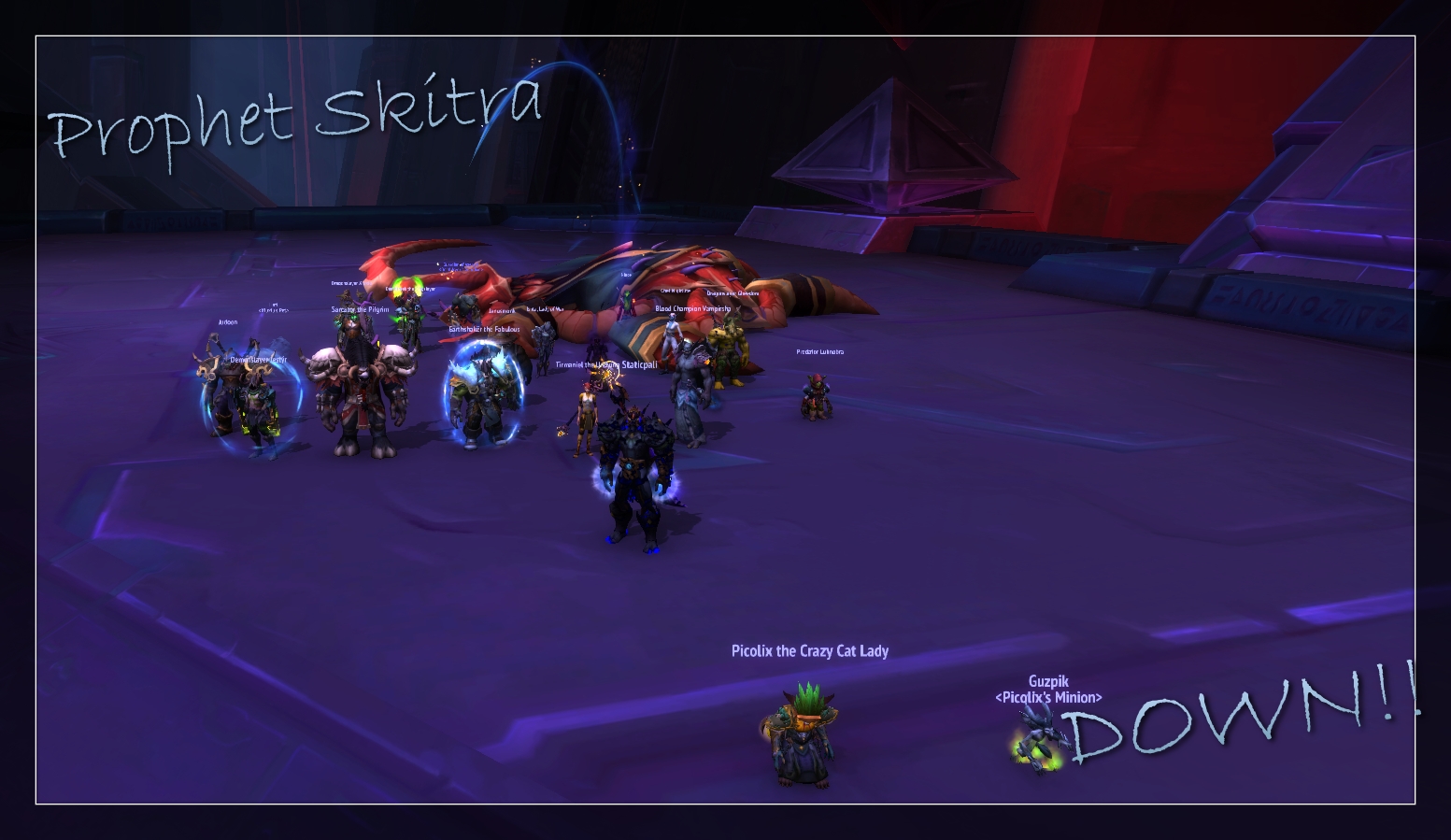 Read More | 0 Replies | Reply
News RSS
This Area is a placeholder for site content. The homepage is typically the only page without content in this area. Content that will display here are things like the forum list, posts, raid details and any other default content for a section of the site or piece of functionality.
Add Widget Below
Add Widget Left
Section Links
Become a Member
Useful Links
Who's Online
Join Discord
Raid Progression
All Raid Progression
Rapid Raid
Last Raids
Ny'alotha
Latest Item(s)
Teamspeak Status
Guild Twitter
Tweets by @darkwolveseu
WoWProgress Rank